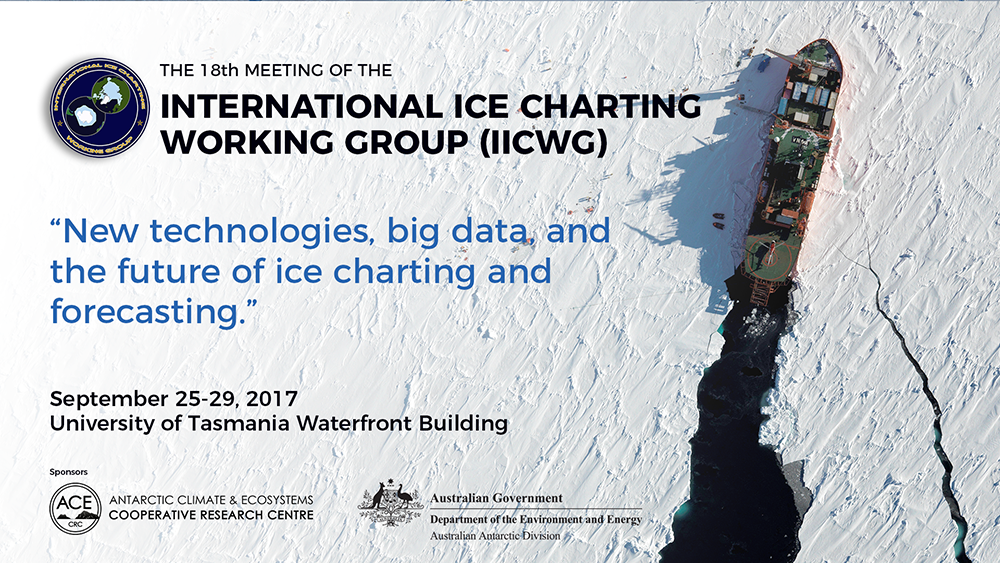 Meteorologists and sea ice scientists from around the world are meeting in Hobart this week to discuss improved navigational services for the growing volume of ship traffic in the Arctic and Antarctic.

The International Ice Charting Working Group meeting is hosted by the Antarctic Climate and Ecosystems Cooperative Research Centre and the Antarctic Gateway Partnership.

Jan Lieser from the Antarctic Climate and Ecosystems CRC says over 60 representatives from 12 countries are in Hobart for the meeting, which will have a special focus on sea ice conditions in the Antarctic.

“Unpredictable sea ice conditions have created all sorts of headaches for scientific and resupply operations in Antarctica, and there is a clear need for more reliable charting and forecasting methods.”

“We have seen a number of private and commercial ships becoming stuck in the Antarctic sea ice in recent years, which have led to costly rescue operations that can delay scientific work.”

“Patterns of sea ice distribution in the Arctic and Antarctic have been changing rapidly in recent years, at the same time as commercial shipping pressure has been increasing.”

“Earlier this year the first commercial ship made its first trip through the Northern Sea Route without icebreaker assistance, and some 50 cruise vessels carried almost 35-thousand tourists to the Antarctic just last year.”

The meeting comes as satellite images confirm that Antarctica’s sea ice has been recorded at its lowest maximum and minimum annual extent since satellite observations began in 1979.

“It appears that both the summertime minimum and the wintertime maximum sea ice extent around Antarctica have set new record lows,” Dr Lieser said.

“Only three years ago we recorded Antarctic sea ice at a record high extent, which really illustrates the level of variability that we are dealing with in this system.”

“It is still too early to draw any clear link between these latest observations and climate change, simply because the variability in the Antarctic sea ice system is so high.”

“We still have a lot more work to do to understand the fundamental oceanic and atmospheric processes driving sea ice variability in Antarctica.”

The meeting, which finishes on Friday, is being held at the University of Tasmania’s Institute for Marine and Antarctic Studies (IMAS).  The theme for the meeting is “New technologies, big data, and the future of ice charting and forecasting.”