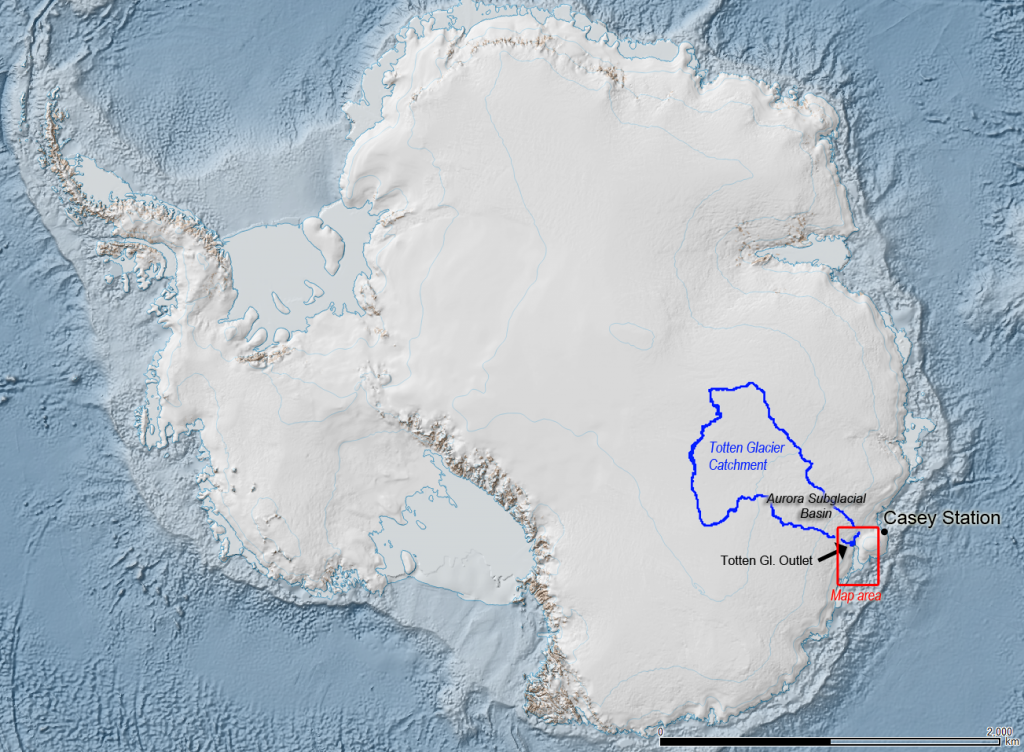 A previously hidden gateway to the ocean underneath the largest glacier in East Antarctica could allow warm seawater to reach the base of the glacier, causing melt and potentially raising sea levels.

The new research, published in the journal Nature Geoscience, shows a five kilometer-wide sub-glacial trough which forms a gateway extending from beneath the Totten Glacier to the coastline.

The study follows findings from a marine science voyage to the glacier earlier this year which detected glacial melt water. However, oceanographers were not able to establish how deep, warm sea water was getting under the glacier.

Australian Antarctic Division glaciologist Dr Jason Roberts said this new work using airborne geophysical surveys has uncovered the deep trench that could allow warm water to penetrate the base of the Totten Glacier.

“The Totten Glacier is the most rapidly thinning glacier in East Antarctica and this melt has the potential to drive substantial regional ice loss,” Dr Roberts said.

“The study identifies a direct pathway for warm ocean water to reach under the glacier; a likely reason for the observed thinning.”

Lead author of the study, Jamin Greenbaum, a Ph.D. student from the University of Texas at Austin, said the findings were concerning because much of the Totten catchment includes extensive regions where ice is grounded below sea level.

“The glacier catchment reaches as deep as 1.7 kilometers below sea level and is covered by up to four kilometers of ice,” Mr Greenbaum said.

There is enough ice in the Totten Glacier alone to raise global sea level by at least 3.5 meters, roughly equivalent to the projected contribution of the entire West Antarctic Ice Sheet if it were to completely collapse.

“While the Totten melt may take several centuries, once change has begun our analysis reveals it would likely be irreversible,” Mr Greenbaum said.

The study, by a team of Australian, US and UK researchers, involved undertaking aerial surveys of more than 156,000 kilometers of the Australian Antarctic Territory over five years.

Program Leader with the Australian Antarctic Division, Dr Tas van Ommen, said the array of equipment on the plane gave scientists a window into the complex dynamics of ice-ocean interactions.

“The findings from this study present a strong case for using aerial surveys in other parts of Antarctica, including the virtually unknown Antarctic inner continental shelf,” Dr van Ommen said.

The data for this study was gathered as part of the ICECAP (International Collaboration for Exploration of the Cryosphere through Aerogeophysical Profiling) project.

A DC3 plane flew missions from Australia’s Casey station over five Antarctic summers from 2008/09 and 2012/13.

ICECAP is a partnership of the Australian Antarctic Division, Antarctic Climate and Ecosystems Cooperative Research Centre, the University of Texas Institute for Geophysics, the US National Science Foundation, the UK’s Natural Environment Research Council, as well as NASA’s Operation IceBridge and the G. Unger Vetlesen Foundation.