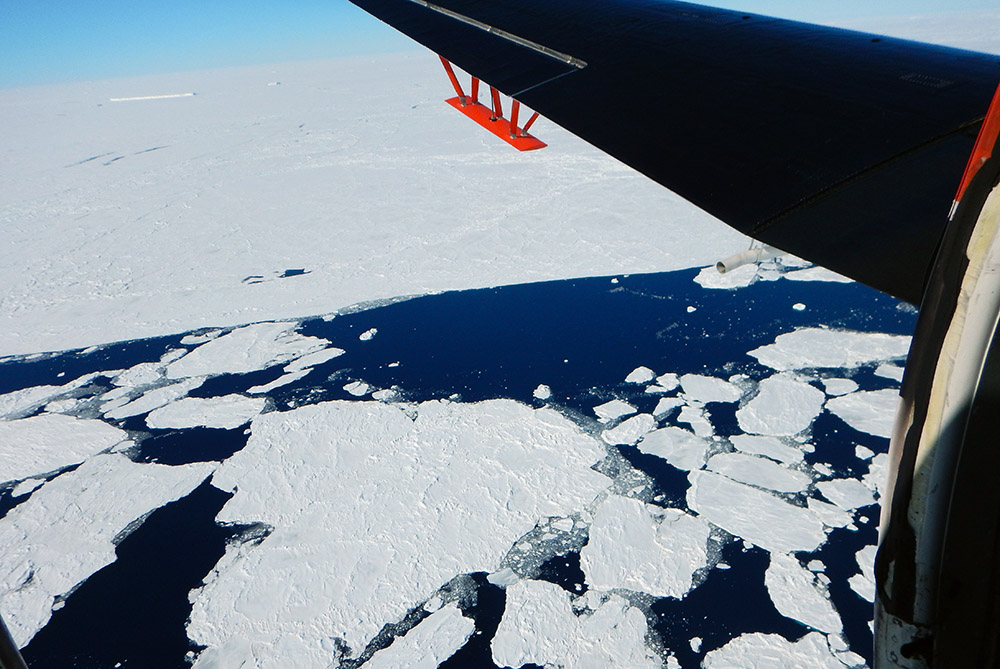 Australian researchers are getting ready for the next season of ICECAP, the groundbreaking international science partnership transforming our understanding of Antarctica’s shrinking ice sheet.

The ice shelves surrounding Antarctica have been thinning in response to climate change for at least two decades, and yet we still know remarkably little about the fundamental processes driving this change.

This is partly due to the mind-boggling complexity of the physical processes that bring swirling masses of heat energy from the oceans and atmosphere into contact with the Antarctic ice sheet. Antarctica remains one of the most data-scarce regions of the planet, despite the urgent need for high quality data for setting the so-called ‘boundary conditions’ required to kickstart and constrain sea level model calculations.

The job of shading in the gaps in our knowledge of the Antarctic cryosphere has therefore become one of the top priorities for scientists studying sea level rise – and it’s a challenge that the international team behind ICECAP is tackling head on.

Dr Lenneke Jong from the Antarctic Climate and Ecosystems Cooperative Research Centre will this year lead the Australian contingent of ICECAP, which stands for International Collaboration for Exploration of the Cryosphere through Aerogeophysical Profiling .

The international consortium brings together the expertise of scientists from the United States, United Kingdom, France, China and Australia, to investigate how and why the ice sheet and ice shelves of East Antarctica are evolving.

In its eight seasons of operation, ICECAP has established itself as one of the most important survey projects of the East Antarctic ice sheet arguably since the time of Mawson, Scott and Amundsen.

Before the launch of ICECAP in the International Polar Year 2008, we knew very little about the underlying topography of the bedrock beneath the East Antarctic ice sheet, or how the ice sheets shifted over time.

Australia’s participation in ICECAP helped to enable detailed airborne geophysical survey of large areas of East Antarctica for the first time, filling in a vast blank on the map of Australia’s Antarctic territory.

To gather the enormous quantities of data required for the project, a reconditioned WWII-era DC-3 airframe is fitted with modern-day radar imaging equipment, magnetometers, gravimeters, lasers and GPS equipment. The view from the ICECAP aerial platform, showing the wing-mounted radar antenna.

Each ICECAP flight covers in a few hours what once took an entire field season or longer. In eight seasons of flying out of Casey Station, the aircraft have covered more than a quarter of a million kilometres of survey, producing terabytes of data.

An ice penetrating radar system produces a massive volume of data, imaging the bedrock below and building a highly detailed picture of the internal layers in the ice sheet at a resolution of only a couple of metres.

The result is the first accurate map of East Antarctica’s topography in three dimensions– stretching from deep inside the ice sheet and out to the surrounding ocean.

This year’s field season will see the ICECAP team focus special attention on the critical ocean-ice threshold at a number of locations near of Casey Station, including the Totten Glacier, the Moscow University Ice Shelf and the Shackleton Ice Shelf.

Their long term scientific goal is to understand the ice shelves’ stability and their response to changes in environmental conditions, such as air and ocean temperatures and ocean currents.

In addition to the ice penetrating radar, the team has recently added a new tool to their data gathering arsenal that enables them to measure changes in ocean properties. The devices, about the size of a large postage tube, are able to measure water depth and properties including temperature, and relay the information back via satellite.

Their mission will be to looking for ocean pathways where warm water might be getting in beneath the glaciers.

The instruments are jettisoned from the aircraft over the target location and are carried to the ocean surface by a small parachute.

At the surface, a probe is released and measures temperature through the water column, relaying the information via a freely unwinding wire to a radio transmitter at the ocean surface.

The devices are among the most efficient and cost-effective means of measuring large areas of the ocean that would usually be inaccessible to ships due to sea ice or ice bergs.

The scientists hope that this information will enable us to understand the type of ocean conditions associated with glacial melting – information that is essential for projecting how the entire ice sheet will continue to respond to future climate change.

There have been a great many Antarctic mapping projects since humans first arrived on the frozen continent. The earliest scientific charts began appearing in the early nineteenth century, soon after Russian expeditioners Fabian Gottlieb von Bellingshausen and Mikhail Lazarev first caught sight of the ice-edge in 1820.

The continent, however, remained largely neglected for the rest of the 19th century because of its hostile environment and isolation. In 1895, the first confirmed landing was conducted by a team of Norwegians. Between then and the arrival of the satellite era in the 1960s, the stubborn geography and bitter climate of Antarctica made it slow going for cartographers. The advent of satellite remote sensing was a step-change in our ability to map changes to the distribution of ice at the edges of the ice sheet, including iceberg calvings and changes in sea ice distribution.

While later generations of satellites were able to reliably measure surface elevation of the ice, the crucial breakthrough for ICECAP is its ability to map the ice sheet in the crucial third dimension. Not much longer than a decade ago, the best and most reliable means of measuring the thickness of the ice sheet in a given location was to drill down until you hit bedrock. When the ice can be several kilometers thick in many parts of the continent, this approach is slow going.

The data generated by ICECAP has begun to transform our understanding of the history and possible future of the East Antarctic ice sheet. One of the biggest surprises from ICECAP was the discovery of plunging glacial valleys buried beneath the ice hundreds kilometres from the edge of the ice sheet. Glacial valleys are not known to form inland but rather at the edges of the ice sheet where it flows more quickly. The findings, published in a landmark paper in the journal Nature, suggest that the formations are relics of the growth of the Antarctic ice sheet over the 20-million-year period beginning some 34-million years ago.

Another finding which has overturned past thinking has been the discovery of vast regions where the ice rests on bedrock that is far below sea level. The East Antarctic ice sheet was previously thought to rest largely on elevated mountainous terrain. This discovery leads to the possibility that this ice could be more vulnerable to future loss as warming oceans force the ice to retreat.

The data produced by this project will continue to be the cornerstone of some of the most important efforts to understand the future fate of the Antarctic ice sheet under climate change. The final result will be a more reliable forecasting system for looking decades, and possibly hundreds of years, into the future at the likely impacts of a warming climate on the East Antarctic ice sheet. [/dropshadowbox] This map shows recent radar mapping lines over Antarctica, including prior surveys and new survey work by China. Most of the East Antarctic coverage, particularly the lines radiating from Casey Station and McMurdo are the result of ICECAP.

The processes that drive the melting of Antarctica’s ice sheet are complex and dynamic. Data from ICECAP is helping scientists develop sophisticated computer models capable of unravelling the complex interactions between these processes. Below are just some of physical processes that must to be factored into ice sheet models.

Basal melting
Glaciers can be melted from below by warm ocean currents, in a process known as basal melting. These processes are strongly influenced by both large scale and local ocean circulation patterns, which are still not well understood in Antarctica

Bed topography
The contours of the earth below the glacier, and its elevation relative to sea level, play a key role in determining the location of where glacial ice begins to float free of the bedrock. This is known as the grounding line. Glaciers that are grounded below sea level further inland are considered more susceptible to the melting effects of warmer water.

Subglacial meltwater
Further inland, the streams and lakes of meltwater that flow beneath glaciers can have a lubricating effect that reduces the friction of ice against bedrock, and speeds the flow of ice into the ocean.

Iceberg calving
Ice shelves tend to act as sort of plug that restricts the flow of ice from the inland to the ocean. Although the calving of large icebergs has little immediate effect on sea levels (because ice shelves are already floating) it nevertheless reduces this critical buttressing effect, enabling the glacier to accelerate. This effect has already been observed on a number of glaciers in West Antarctica.

Surface meltwater
Satellite measurements indicate that the amount of melted water gathering in pools and streams has been increasing on a number of glaciers in East Antarctica. When this water freezes inside crevices, it can have a powerful ratcheting effect that can trigger icebergs to calve, or even the breakup of an entire ice shelf (what scientists refer to as ‘catastrophic ice shelf collapse’). [/dropshadowbox]