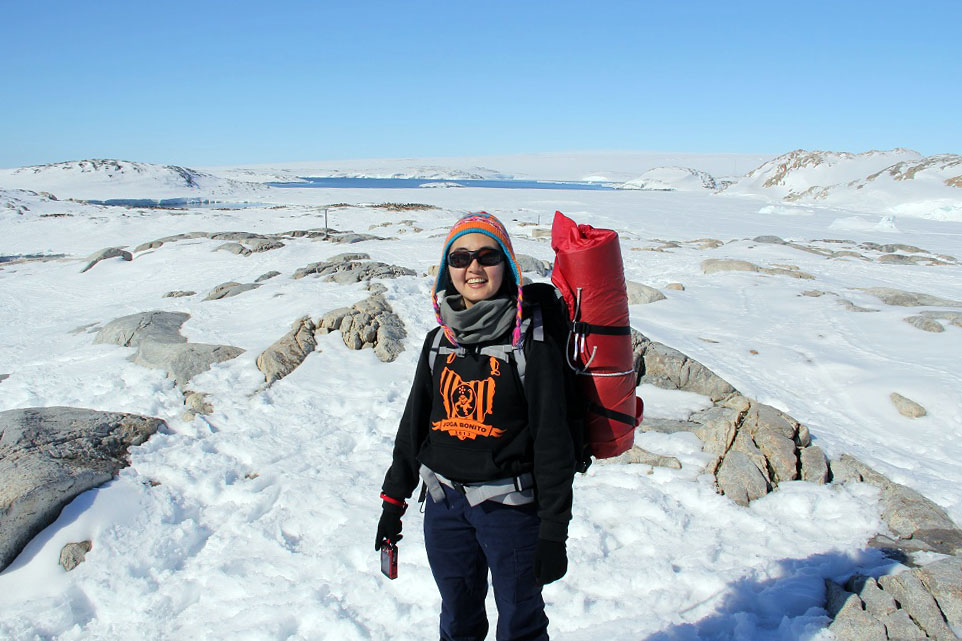 Congratulations to ACE CRC student, Mana Inoue, who recently completed her PhD with the University of Tasmania’s Institute for Marine and Antarctic Studies.

The beauty of Antarctica and a thirst for new experiences are what sparked Mana’s interest in an Antarctic science career.

Mana began her PhD with the ACE CRC in 2011, after completing her Honours at IMAS. The main focus of the research has been interpreting the 97 year climate record contained in the Mill Island Ice Core. The 120 metre core, drilled by Australian scientists in 2009, is one of the northernmost ice cores drilled in Antarctica and contains a very high resolution climate record due to the site’s extremely high snow accumulation rate.

Mana has been an enthusiastic participant in academic and social life during her time with the ACE CRC. With a passion for inspiring young minds, Mana has been part of the Young Antarctic Scientists program, visiting primary schools to conduct hands on demonstrations of science in Antarctica. She has also served as an Executive National Committee member in the Association of Polar Early Career Scientist (APECS) Oceania. She says the highlight of her studies was the two months she spent as a Field Assistant in Antarctica in 2013-14, including three weeks at Aurora Basin where she was responsible for cutting, scraping and packing hundreds of metres of ice core samples.  Mana’s experiences at Aurora Basin are recorded in stories and photographs in a blog on the Antarctic Division website.

She says the hard work of writing the PhD was made easier by the strong friendships she has formed during her time here.

“Meeting people has been one of the best parts of it, and all the great friendships I have made with people from around the world,” she said.

“The friendships make up for all the stress of work and deadlines.”

Mana is keeping an eye out for a post-doctoral research role, but for the moment she is enjoying her current job as a Logistics Officer for the Antarctic Division where she is responsible for kitting expeditioners with warm clothes and protective wear.

“I’ve gone from doing science in front of my computer to working in a clothing store!

“But it’s really fun to see the other side of the Antarctic Division – not just the academic side. The best part is that I get to meet all the people who are visiting Antarctica.”