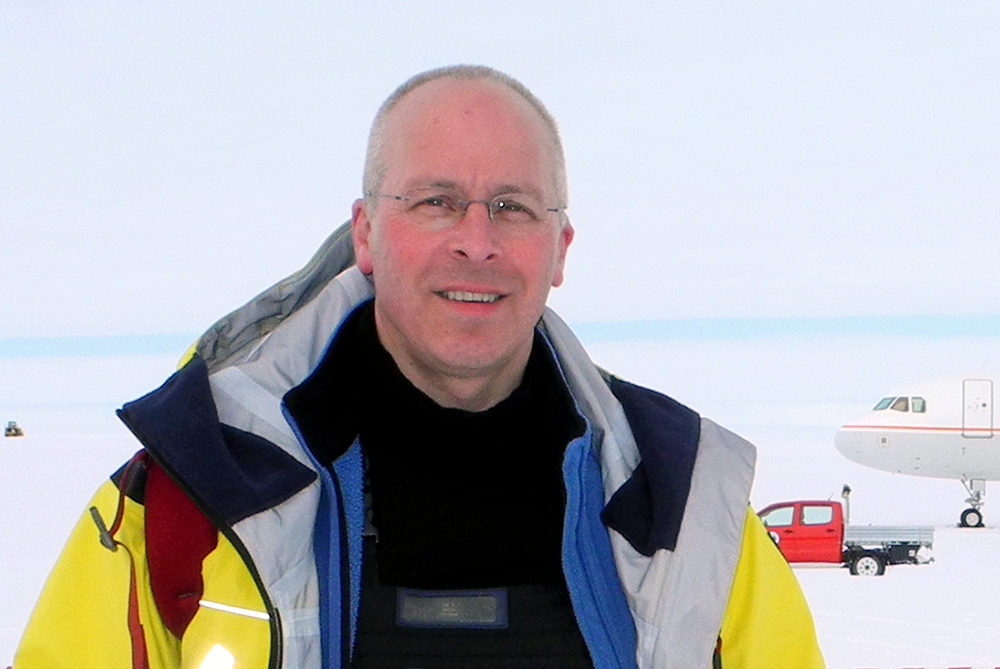 In this article, first published in The Conversation, Dr Tas Van Ommen discusses how the ICECAP collaboration between US, British and Australian Antarctic researchers has dramatically shifted our understanding of the East Antarctic ice sheet.

It’s 11 o’clock on a January evening in 2011 as our venerable old DC-3 aircraft banks over Casey Station, in the last golden rays of an Antarctic sunset. Offshore, an armada of giant icebergs sits stalled in the relative shallows along Peterson Bank, a mix of dusky pink highlights and violet shadows.

Inside the aircraft we shut down our instruments, and I strap myself back in my seat before the gentle bump and swoosh of the snowy landing – another mission under our belts.

The ICECAP (International Collaboration for Exploration of the Cryosphere through Aerogeophysical Profiling) project – a collaboration between US, British and Australian Antarctic researchers – has been mapping the East Antarctic ice sheet to look for changes. On our many flights, we have used radar, laser, geomagnetic and gravity instruments to survey an area the size of New South Wales, inland from Casey Station. So far, the flights have covered a total of 150,000 km over the frozen continent’s vast eastern expanse.

And it turns out that East Antarctica needs careful watching. The project is giving us a new look at the underside of the ice sheet in East Antarctica, and causing significant concerns for future increases in sea level. One of the project’s major recent discoveries is that the terrain under the region’s biggest and most important glacier may make it more vulnerable to melting than we thought.

Before embarking on the ICECAP project, there were huge gaps in our maps of the bedrock under the ice. The region contains some of the thickest, deepest ice on the continent, more than 4 km thick, and it’s a place we need to map as we look for a good site to drill an elusive “million-year” ice core.

Generally, we expected the mapping surveys to reveal a picture of a stable ice sheet, not likely to be affected by changes wreaked by climate warming like the more vulnerable West Antarctica. But this view was to change.

Satellite monitoring drew our attention to a hot-spot right beside our Casey hub. The Totten Glacier is the largest glacier in East Antarctica. It drains most of the area of our survey, every year discharging more than 70 cubic km of water into the Southern Ocean. The monster glacier reaches the coast behind a large rocky obstacle known as Law Dome.

Casey Station sits on the west side of Law Dome, while the Totten Glacier runs out on the east. As it does so, it carves a deep trench more than 2 km below sea level, through which the ice emerges and begins to float. Our satellite measurements were showing that just around this point where the ice begins floating, the Totten is thinning and its surface height is lowering by about 2 m per year. ICECAP researchers set about measuring the Totten Glacier’s outlet, so we could understand what is happening.

The project’s results have quite dramatically shifted our view of East Antarctica, in terms of both the overall picture of ice stability in the region, and the implications of the changes in the Totten Glacier itself. The previous view was that, aside from a poorly mapped valley far inland of Casey called the Aurora Basin, most of the ice was resting on hills and mountains, well above sea level. But it turns out that Aurora Basin is very deep and much larger than we thought.

More seriously, the basin is connected to the coast by terrain that is extensively below sea level. This makes it much more like West Antarctica, where there is serious concern that gradual but irreversible ice loss is already under way. The prospect that such a pattern could also impact East Antarctica is a new one – and the prospect that the Totten Glacier’s thinning could herald a similar process of accelerating ice loss in East Antarctica is deeply concerning.

To appreciate the physical situation, some glaciology is needed. First, outlet glaciers like Totten meet the ocean in floating ice shelves, where they calve icebergs and also melt in the relatively warmer ocean. These ice shelves are buttressed against the coast on their sides and also, in cases like Totten, are very congested at the calving front.

This acts like a “cork in a bottle” that slows the ice as it flows to the sea. But any loss of the ice shelf or retreat of the calving front can let this cork pop out.

A second factor can kick in when the glacier rests below sea level, on a bed that deepens towards its interior. In this situation, if the ice retreats, a runaway process of accelerating flow and further retreat is unstoppable until the ice reaches a point where the bed begins to rise again. In the case of Totten Glacier, a retreat all the way into the deep Aurora Basin would release enough melted ice over the coming centuries to raise sea levels by at least 3.5 m – similar to the potential contribution from the whole of West Antarctica.

What’s more, my colleagues and I recently identified at least two deep channels reaching back under the glacier front, which may provide a way for warm water to reach deep under the glacier, and could explain the observed thinning and lowering. We discovered the channels with the help of airborne radar and gravity measurements, but what we really need next are direct ocean measurements. Plans are being considered for use of remotely controlled underwater vehicles and robot floats dropped from the air to investigate what is really happening under the Totten Glacier.

Better mapping of the region’s bedrock and ocean cavities will also help us match observations with computer model simulations of the ice and oceans, which will be crucial in predicting the changes we can expect East Antarctica to undergo in the future.

Drones and submarines will help gather these measurements, but there is still plenty of work ahead, and it’s fair to say that our old workhorse DC3 aircraft will be busy surveying East Antarctica for many years to come.

First published in The Conversation