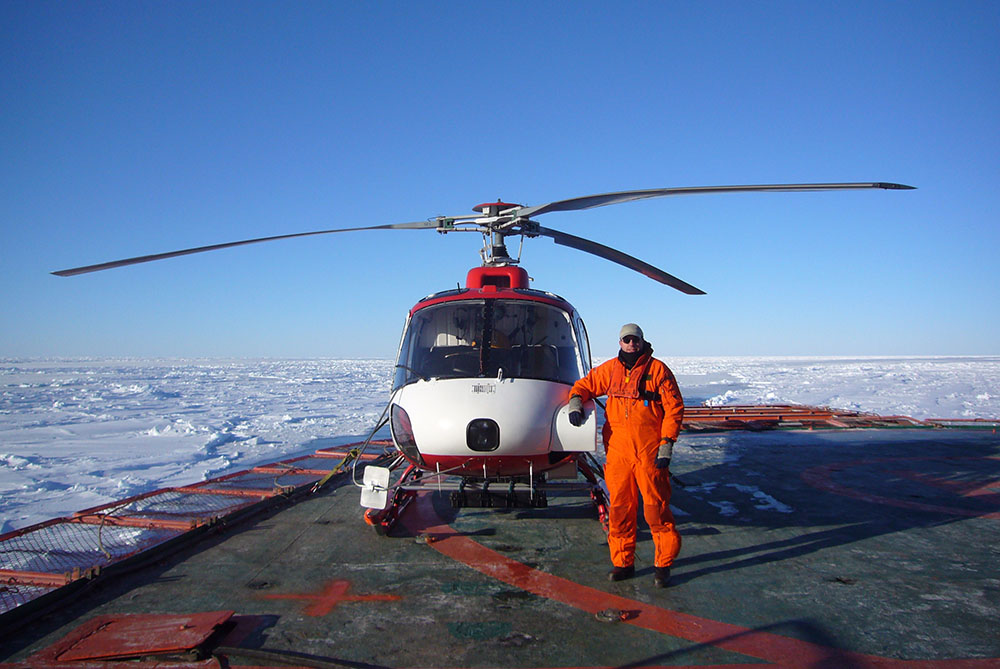 Every autumn, the ocean around Antarctica undergoes a remarkable transformation.

The temperature of the surface falls below zero and a layer of sea ice begins to form on the surface.

Over several months — and under the influence of strong winds and currents — this sea ice cover extends to roughly three times the area of Australia.

Thanks to satellite remote sensing, we have been able to monitor global sea ice extent on a daily basis since 1979.

This data record reveals a striking apparent paradox: that the total area of Antarctic sea ice extent is expanding even as the world as a whole has warmed.

To understand why this is happening, we need to keep in mind the important difference between sea ice and the main Antarctic ice sheet, which covers the continental land mass.

The Antarctic ice sheet is a massive body of fresh ice — several kilometres thick in places — that was formed over hundreds of thousands of years by accumulated snowfall.

Sea ice, usually only a few metres thick, forms on the surface of the ocean and expands and contracts on an annual basis.

Despite the expansion of the sea ice, the Antarctic ice sheet is continuing to shrink rapidly just as it is in the Arctic.

An important clue in this puzzle lies in knowing that temperature is not the only factor responsible for the formation of sea ice.

The level of snowfall, the saltiness of the water and the motion of the winds, waves and ocean currents all play an important role.

Meteorological records show that, among a lot of regional variation, parts of the Antarctic are becoming windier.

Winds that have been the bane of sailors for centuries — including the Shrieking Sixties of the sea ice zone — are being affected by climate change that is driving changes in sea ice drift and formation patterns.

Research indicates that these large-scale wind patterns are linked to increasing atmospheric carbon dioxide and ozone loss, as well as natural variability.

We also know that the surface water around the Antarctic is becoming less salty.

Because fresher water freezes at a higher temperature, it is believed that increased snowfall over the high-latitude Southern Ocean and the input of an estimated extra 100 gigatonnes of fresh water every year from the melting of Antarctic ice sheet are both playing a role.

This is an extremely complex system, and many important questions remain unanswered.

For instance, satellite data can only tell us the area covered by sea ice, but not its thickness. Historical whaling records and ice core research carried out in Hobart also indicate that Antarctic sea-ice extent was even more expansive in the early 1900s.

Fully understanding the ice-ocean-atmosphere interaction system and what role it plays in climate change and variability represents a considerable challenge.

Unravelling the complex processes at work requires sophisticated mathematical models informed by satellites and surface measurements using icebreakers such as the RV Aurora Australis and state-of-the-art techniques and instrumentation.

One of the questions scientists are often asked is why our research matters. This is an important question, and in the case of Antarctic sea ice expansion there are some important considerations behind the quest to understand these processes.

The annual advance and retreat of Antarctic sea ice is one of the most critical components in the global climate system.

It fundamentally affects the interaction between the ocean and the atmosphere, plays a key role in driving global ocean circulation and creates an important habitat for a wide range of species. Ancient ice core records show a very close link between the Antarctic climate and the Australian climate.

To ensure that operations at least in the Australian Antarctic Territory are as safe and efficient as possible, the Antarctic Climate and Ecosystems Co-operative Research Centre together with its partners, including the Bureau of Meteorology, the University of Tasmania, the CSIRO and Australian Antarctic Division are working to understand and predict these changes.

For the ships operating this area the questions raised by sea ice expansion are pressing and immediate.

The stranding of the Russian vessel Akademik Shokalskiy last year is just one example. As tourism interest grows and as nations like the US, China and India increase Antarctic research spending, the need for a reliable system of forecasting and monitoring sea ice is becoming apparent.