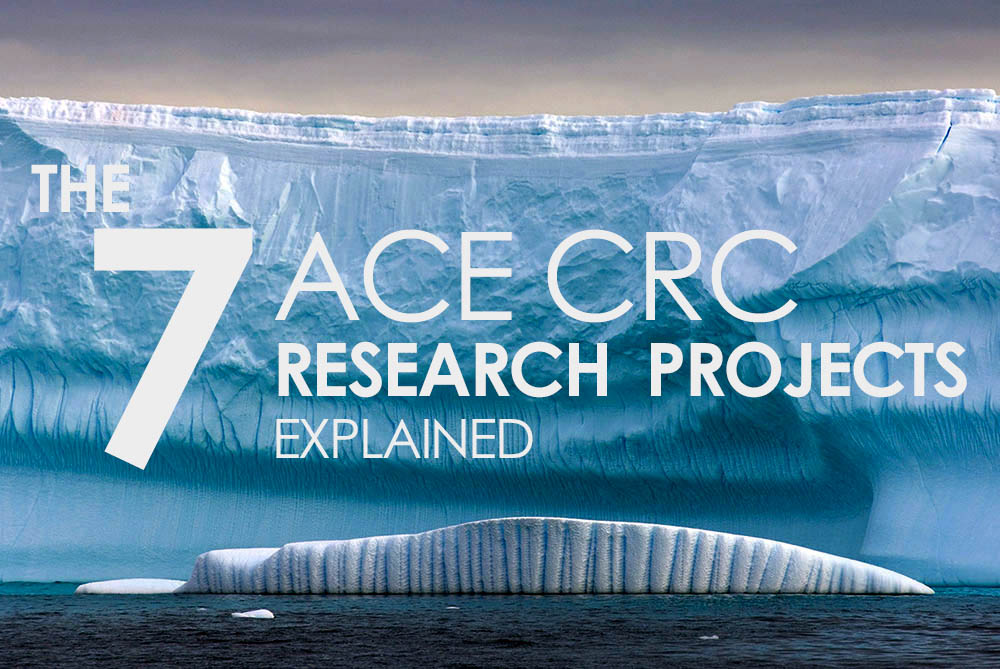 The ACE CRC has seven key research projects. These seven highly integrated projects are aimed at understanding how the physical environment of Antarctica and the Southern Ocean is changing, why those changes are occurring, and what the impacts are for marine ecosystems.

Project 1.1
The Southern Ocean in a Changing Climate

Project R1.1 is focused on the big picture of how and why the Southern Ocean is changing, including the human contribution to these changes.

The Southern Ocean is an extremely important region for scientific inquiry for Australia.  As a primary driver of the climate system and a vast biological powerhouse, even small changes in the Southern Ocean can affect the everyday lives of Australians.

The Southern Ocean is also experiencing change more rapidly than any of the world’s major oceans.  It is becoming warmer, more acidic, fresher and lower in oxygen. Exactly why this is happening and what it means for our climate, fisheries and broader marine ecosystems are the focus of the Southern Ocean in a Changing Climate project team.

Project R1.2 is focused at the critical point at which the Southern Ocean comes into contact with the Antarctic ice sheet, how they interact, and what this means for sea level rise.

The rate at which ice is released from the Antarctic continent into the oceans is presently the greatest source of uncertainty in forecasts of global sea level rise.

The East Antarctic and West Antarctic ice sheets together hold around 70 per cent of the world’s fresh water and more than 90 per cent of its ice – enough to raise global sea level by about 60 meters. Whilst sea level rise at this scale is not realistic under any current scenarios, the impact of just a few metres of sea rise on coastal infrastructure would be major.

Project 1.3 is focused on the highly changeable sea ice zone that surrounds the Antarctic continent.

The annual growth and retreat cycle of sea ice around Antarctica represents one of the biggest seasonal changes on Earth, and has immense importance to the global climate system. Sea ice formation drives a powerful northbound current that circulates throughout the world’s oceans and regulates the Earth’s climate.  Sea ice also provides habitat to key Southern Ocean species such as krill.

Despite its importance to the global climate system and ocean food web, relatively little is known about how Antarctic sea ice will be affected as weather patterns change and as the Southern Ocean continues to change.

As part targeting these knowledge gaps, the Sea Ice Processes and Change project team are also working towards development of an improved Australian capability in ice analysis and forecasting in support of marine operations in the Southern Ocean.

Project 1.4
Antarctic Climate Variability of the Past 2,000 Years

Project 1.4 is working on a deep-time reconstruction of climate history using ice cores drilled in locations around East Antarctica.

Ice cores are an extremely valuable resource for understanding the forces driving climate change. Analysis of the physical and chemical properties of the ice and air bubbles can reveal detailed information about the climate not just around Antarctica, but for the entire globe.

Understanding the forces that shaped past climate change gives us tools to understand and predict future changes with much greater certainty.

The ACE CRC’s Antarctic Climate Variability project team is working closely with its Australian and international partners to close the gaps in our knowledge of past global climate conditions, to help governments, policy makers and planning agencies make informed choices about the future.

Project R2.1 is focused on the chemistry of the Southern Ocean, including its role in absorbing carbon dioxide from the atmosphere.

About one third of the carbon dioxide released by human activities is absorbed in the ocean, with the Southern Ocean playing the most important role of any ocean and accounting for about 40% of the total.

This process slows the rate of climate change, but it also increases the the acidity of the ocean.

One the most important questions facing climate science today is whether or not the Southern Ocean can continue to absorb carbon dioxide at its current rate, or if this effect will taper off in future.

The Carbon Uptake and Chemical Change the are using conducting a variety of ship and laboratory based experiments aimed at understanding the physical, chemical, and biological processes that control this carbon absorption, in order to improve predictions for future change.

Project 2.2 is examining the impacts  of changes in the Southern Ocean on the species that live there.

Previous work by the ACE CRC has identified major changes in the physical and chemical properties of the Southern Ocean, including increasing acidity, warming freshening and changes in sea ice extent.

The Biological Responses to Climate Change project team is working to determine which key species will be more sensitive to change, which species may contribute to change and how change will vary from region to region.  These new scientific insights will have important implications for management of fish stocks and high conservation value species throughout the region.

Project 2.3
Status and Trends in Habitats, Key Species and Ecosystems

Project R2.3 is establishing robust methods for understanding the makeup of current and future Southern Ocean ecosystems.  The aim is to provide governments and management agencies with the best available forecasts when formulating conservation, fisheries and resource management strategies.

Both the Intergovernmental Panel on Climate Change (IPCC) and the Commission for the Conservation of Antarctic Marine Living Resources (CCAMLR) have highlighted the need for improved methods for predicting changes in Southern Ocean ecosystems.  Working as part of a broader international effort, the ACE CRC’s Status and Trends in Habitats, Key Species and Ecosystems ream is focusing on foodwebs in the Indian and West Pacific Sectors of the Southern Ocean.